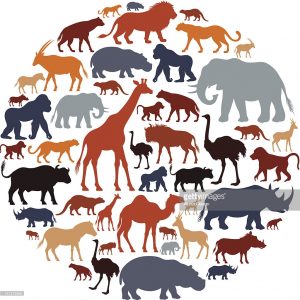 Africa has an abundant diversity of fauna and flora.  It constitutes the highest proportion of Key Biodiversity Areas (KBAs) globally. Some studies show that Africa is home to some one quarter of the world’s 4,700 mammal species, including 79 species of antelope. It also has more than 2,000 species of birds (one fifth of the world’s total) and at least 2,000 species of fish, alongside 950 amphibian species.  The African mainland harbours between 40,000 and 60,000 plant species and about 100,000 known species of insects, spiders and other arachnids.  Eight of the world’s 34 biodiversity hotspots are in Africa.

Wildlife conservation means protection and sustainable use of wildlife.  The goal of conserving wildlife is to ensure that wildlife resources are not consumed faster than they are replaced.  Conservation concerns include sustainable use, protection, maintenance, rehabilitation, restoration and enhancement of populations and ecosystems.  Wildlife resources are classified as being renewable but if not properly conserved, they can become extinct.

There are strong reasons to conserve wildlife resources including to improve human wellbeing and contribute to development through the provision of ecosystem services such as water and carbon storage, soil and natural resources.  Every country has its own policies and laws to ensure sound conservation practices and to address the degradation and loss of wildlife resources.

Threats to Wildlife in Africa

Serious challenges associated with prevalence of multi-faceted pressures are threatening the continued existence of most of the wildlife species in Africa. Wildlife loss results from a wide array of complex factors.  One of the greatest threats is the increasing overexploitation of wildlife and wildlife habitats.  As human populations grow and economies expand, activities like mining and infrastructure development tends to displace wildlife.  Climate change and pollution are also leading contributors to loss of wildlife in Africa.

Wildlife crime still remains a serious conservation issue which has grown so much as to have international ramifications. Wildlife crime includes poaching, illegal exploitation of wildlife resources, encroachment into protected areas, illegal wildlife trade and destruction of wildlife habitats.   It has both direct and indirect negative impacts on local communities, including depletion of the resource base on which they depend for their livelihoods.  According to recent studies, wildlife crime is the fourth largest illegal activity in the world, after drug trafficking, counterfeiting and human trafficking, with an annual turnover of at least US$ 19 billion.  Poaching is now being undertaken through highly organized, networked and technologically well-equipped systems that result in significant loss of wildlife resources.  For example, the existing trends indicate that ever-increasing poaching crisis is taking away 3 rhinos every day and 30,000 elephants every year. This shows that the iconic species of Africa have been driven to the verge of extinction as the poaching crisis escalates.

It is therefore crucial to put in place the necessary measures in order to reverse the escalating prevalence of wildlife crime and in this regard, wildlife issues need to be taken as key measure of governance and a burning development agenda of all countries of Africa and all concerned bodies should strengthen their collaboration towards this endeavour.

Kahsay G.A, An Overview of Existing Endeavours Towards Sound Wildlife Conservation in Ethiopia and the Role of Partners (Unpublished, 2014)